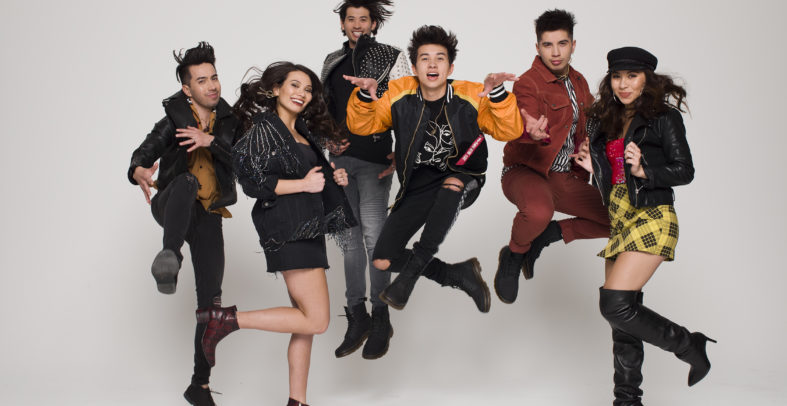 Creating their name, JAGMAC, from the first initial of all six members’ names, this sibling group brilliantly incorporates their unique talents to create an unforgettable musical experience. The JAGMAC performance is unlike any other! Their high-energy show not only wows audiences, but keeps them wanting more! From songwriting to singing, from musical instruments to perfectly blended harmonies, from martial arts kicks and sticks to cutting edge dance moves, this black belt band of brothers and sisters – Jared, Angelique, Gabriel, Manjo, Alyssa and CJ (collectively JAGMAC) – are truly in a class of their own!

To date, JAGMAC has performed on three continents and at countless venues. The band has opened for several top acts including the U.K’s infamous girl group, Little Mix, winners of the ABC TV competition, “Boy Band,” In Real Life, and Forever In Your Mind. The group has also performed at multiple music festivals and events alongside such artists as: Chainsmokers, CNCO, Becky G, Ava Max, Nathan Sykes, Aston Merrygold, Ella Henderson and Mr. Probz. Over the past few years, JAGMAC has worked in the recording studio with some of the industry’s hottest Grammy Award-winning songwriters and producers such as Neff-U, Lauren Christy, Pam Sheyne, Graham Edwards, and Bryan Todd. JAGMAC also had their television debut on the FX Emmy Award winning comedy series, “Baskets,” featuring Zack Galifianakis and Louie Anderson.

The pop sibling group first gained international attention after they were named Radio Disney’s “NBT” (Next Big Thing) in 2018 joining an impressive roster of NBT alumni who are currently some of today’s biggest artists including: Shawn Mendes, Camila Cabello, Fifth Harmony, Alessia Cara, and Why Don’t We. Currently, JAGMAC is taking the world by storm with their newest EP “Like A Band.” Named after their single by the same name, the EP includes the songs “Mood For The Day,” “I.O.U.,” “Trending,” “Simple” and the group’s latest hit single, “Like A Band”, which is currently playing on Radio Disney, Sirius XM, and Music Choice and can heard by heard on radio stations and streaming services around the world. “Like A Band” has been also been featured on some of Spotify’s top playlists including Pop Remix, Happy Beats, and Dance Rising. The group’s past singles “Right Back With You”, “Not Sure”, and “I.O.U” also received national airplay.  In addition, their heart-thumping song “Soldiers” reached #5 on Music Week’s Commercial Pop chart and #15 on Billboard’s Hot Club Chart.

JAGMAC is swiftly on the rise, and their strong international appeal will soon cause this unique family band to become a household name, not only in the U.S., but around the world.